The M&A Market in Bulgaria – an Internet Research 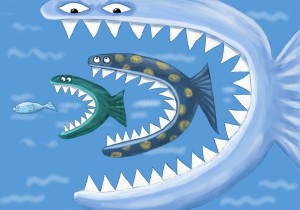 Overview of the Bulgarian M&A Market 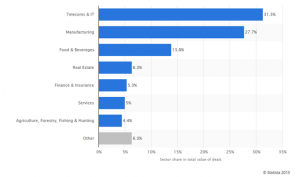 A M&A sector breakdown by transaction volume in 2014

Another characteristic of the Bulgarian M&A market is its leading place in CEE of internal M&A deals – a total of 67% for 2014. What this signals is relative lack of international interest and also exit of some foreign investors, who are being replaced with Bulgarian ones. Further most Bulgarian investors are financial (58%) rather than strategic (9). Having said that, two of the Bulgarian M&A deals in 2014 are among the volume leaders in the CEE countries – Bulgartabac and Telerik (see below).

For the past five years (following the Global Crisis) the market was in decline and still is. The Bulgarian M&A market is still driven by the sellers (1). Unlike the last few years, however, in 2015 there is also some interest not only from local but also from foreign buyers. This means that, although not very active, the buyers are monitoring the Bulgarian market. This is an optimistic note, but only that. Compared to the USD 3.17T (some 32% growth from 2014/ M&A 2015 deals worldwide (Reuters), Bulgaria and CEE remain in the periphery of the frenzy.

The Ukrainian crisis is reported as a set-back factor restraining investments in Russia, Ukraine, former Soviet republics and CEE altogether (legal consultants CMS). Other barriers to international investors are “market interventions, over-regulation and bureaucracy have long troubled Europe, but their influence is more heavily felt in the eastern European countries like Slovakia, Romania and Bulgaria” (2). Other barriers for investors are the demographic trends, lack of skilled labor and education (2). However, the activity during end of 2014 and 2015 show that for good Bulgarian companies, it is always possible to find investors (2).

2015 started strong with its third quarter reporting the finalization of 16 M&A deals, with 6 in the pipeline (1). The total Q3 M&A disclosed volume is EUR 160M with Blizoo being the leader and the remaining being grouped as “small” (1). Of the latter worth mentioning is the financial investment in Waltopia and the exit of German giant Bosch from its renewable solar energy projects in Bulgaria.

Overall Bulgarian M&A market for 2015 is expected to be around EUR 600 M with some 30-40 considerable deals taking place (3). Anticipated M&A activity is in the banking sector, IT sector, office spaces, media sector, food industry, health and retail business.

Bulgarian companies, being a bit conservative, are still reluctant to seek expansion by M&A. Unfortunately they approach the M&A market not for growth, but when in trouble. It may be anticipated that in the near future, more will be seeking M&A growth consultancy. It is difficult to predict how many of these will be finalized successfully (10).

Players on the Bulgarian M&A Market

The big ticket M&A deals are normally supported by one of “the big five” audit firms, which all have Bulgarian offices or by local banks, most of which have their investment subsidiaries:

for Bulgaria the small and medium M&A deals are considered to be between EUR 10M and EUR 100M.

This is a mutual investment fund. It was one of the two selected to invest European Investment Fund (under the JEREMIE initiative) funds for the current program period. Together with Empower Capital (see next) they should invest EUR 25M, which should reach Bulgarian SME until year end 2015 (1). BlackPeak Capital controls EUR 10M. Empower Capital controls EUR 15M. Three of the investments in 2015 are theirs: Walltopia, International Power Supply and Bulpros Consulting.

This is a mutual investment fund, controlling EUR 15M of the EIF (see above) to be invested in SME equity until end of 2015. Both Empower Capital and BlackPeak Capital are established and run by the entrepreneur Elvin Guri.

This is part of the China CEE Fund, which manages USD 435M. The fund was created by the China Exim Bank, partnering with other institutional investors. The fund is focused on investing in CEE. Walltopia is the first Bulgarian investment of the fund.

In for the period 2014-2020 Bulgarian Government has given EUR 120M to EIF which will manage them and disburse to local SME through local banks.

This is a combined initiative of the EU Commission and of the EIB for debt and equity support to SME and startups. Until year end 2014 the various funds under Jeremie had a combined portfolio of EUR 628M invested in 6247 Bulgarian companies.

This is a start-up investment fund operating in CEE including Bulgaria.

There are not many international M&A companies with offices in Bulgaria. This is probably due to the low M&A activity. Here are some of the few:

This is a fully owned subsidiary of Europa Capital Management (www.ecm.cz ) focused on the Balkan countries.

There seems to be an abundance of local M&A support companies. However, due to the relatively low M&A activity, usually M&A is far from being their core business.

This is the Bulgarian partner to M&A Worldwide

This is the successor to KBC Securities Bulgaria

Big Deals on the Bulgarian M&A Market in 2015

Sources of information sited in the paper:

The current market research on the Bulgarian M&A market is based on public information sources available on the internet and quoted at the end of the article.